(for use as an appendix to Guide to  the  Dissection  o f the  Dog, 7th edition) Esther M. Gallant, PhD

This is not a comprehensive guide to cat anatomy, but rather a brief description of those aspects of feline anatomy which differ significantly from canine anatomy. Page  and  figure  numbers  for  corresponding sections in Guide to the Dissection of the Dog, 7th Edition, (DG) are given in parentheses to facilitate comparisons between cat and dog morphology. Figures illustrating feline anatomy are not complete detailed representations but rather include only the structures of interest plus a few helpful landmarks for purposes of orientation.  The asterisks (*) in the text indicate items of special clinical significance.

Notice that cats have an average of 4 pair of mammary glands : 2 pair thoracic, 1 pair abdominal and 1 pair inguinal. (TVA).  Some big cats have only the caudal pairs.

•        A pronounced coracoid process projects medially from the supraglenoid tubercle. This is the origin of the coracobrachialis m. (Figure 1B).

•        In the cat, a slender clavicle is present at the clavicular intersection of the brachiocephalicus m. (DG. p. 21). The ossified clavicle, which has no bony articulations, may be evident in radiographs (Figure 1C). 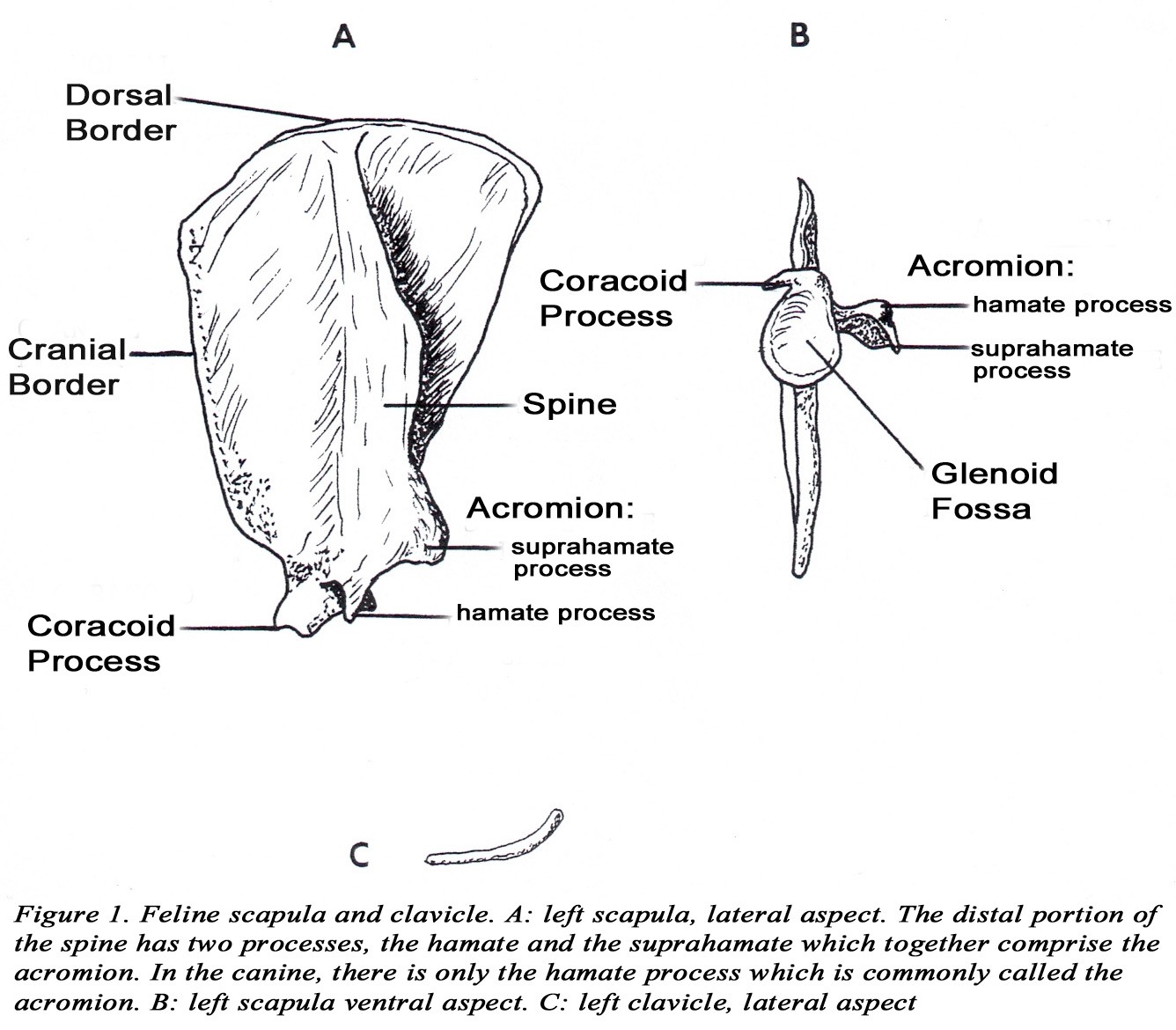 •        A supracondylar foramen is present in the distal medial humerus. The brachial artery and median nerve pass through this foramen (Figure 2A). *This relationship can be important in the treatment of feline condyloid fractures of the humerus because of the possibility of damage to the artery and nerve where they pass through the foramen. Note: the dog has a supratrochlear foramen (nothing passes through it).

•        Coronoid and radial fossae are present on the cranial side of the humoral condyle.

•        The radial tuberosity projects caudally from the radius and is the site of insertion of the biceps brachii m. (Figure 2B). 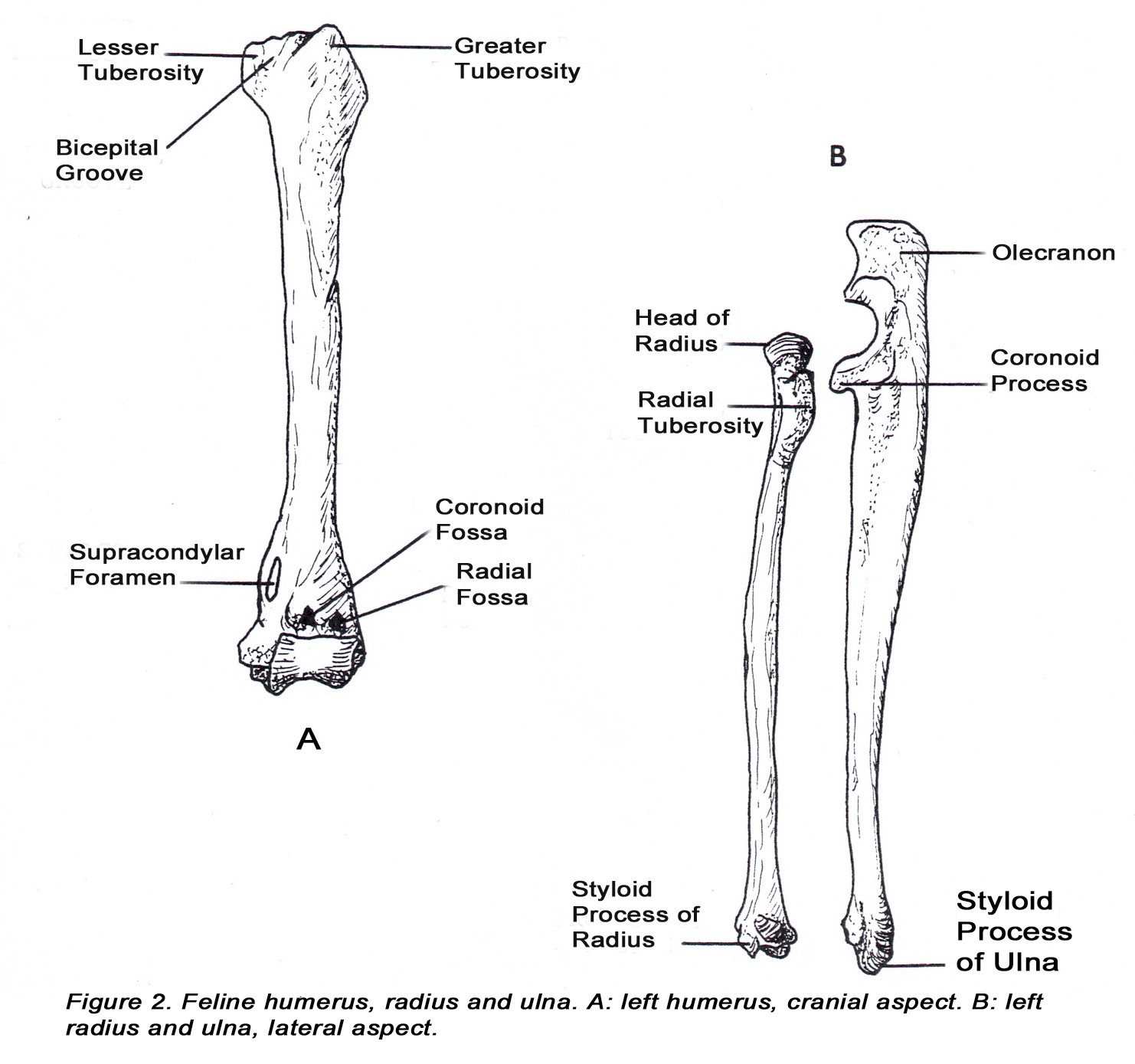 •        The distal phalanx has a deep concave caudal surface that articulates with the middle phalanx to form the distal interphalangeal joint (Figure 3C). 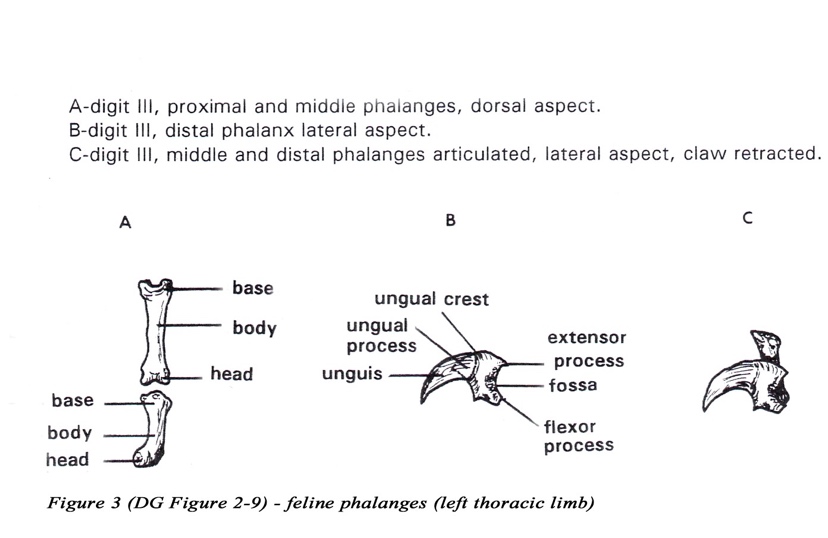 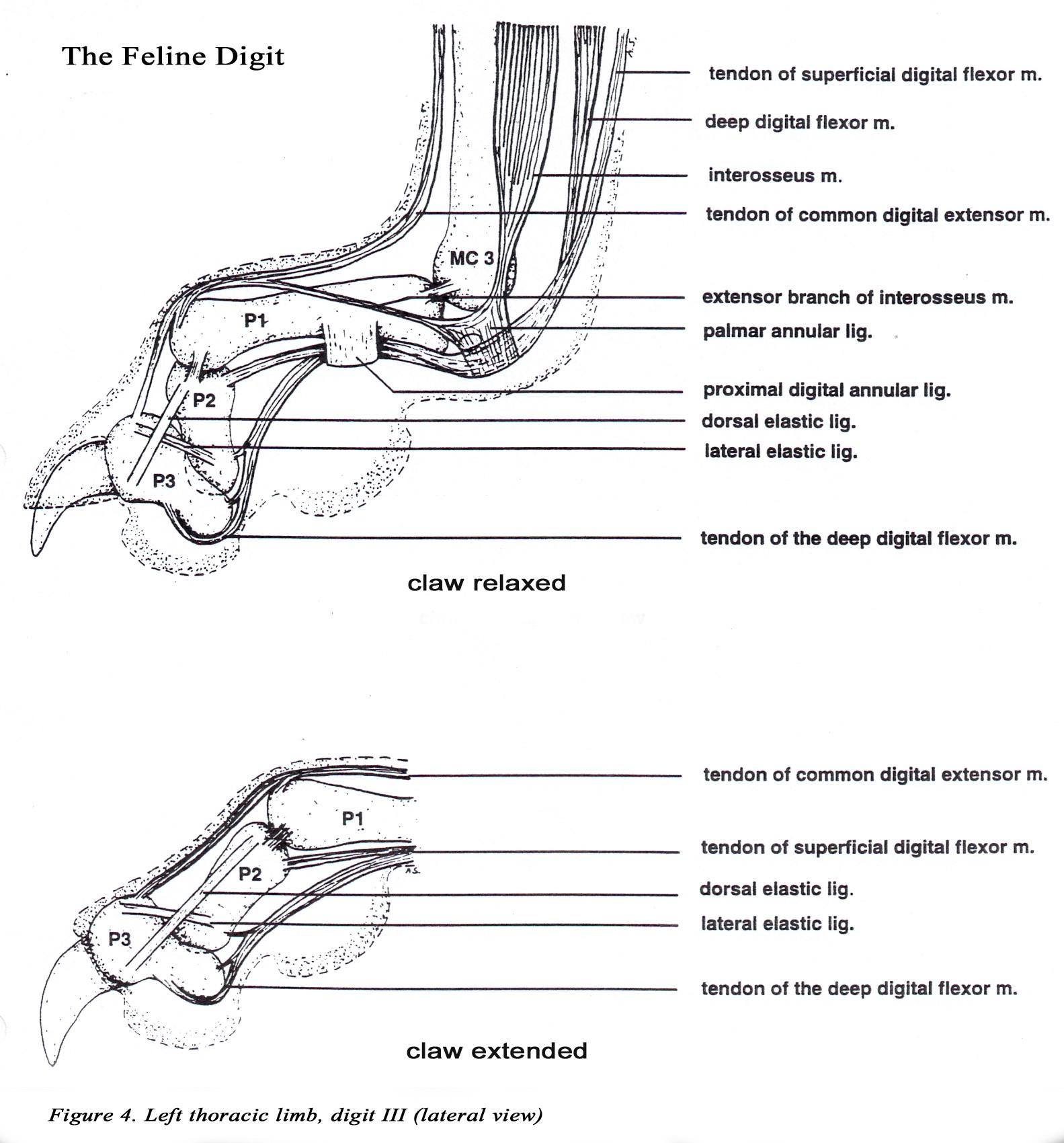 •        The claw is protruded by contraction of the deep digital flexor m. which inserts on the flexor process of the distal phalanx. During claw protrusion, more proximal joints of the paw are fixed in position by action of the digital extensor mm. The ability to retract the claws keeps them sharp by preventing wear when not in use.  All cats have retractable claws except the cheetah.

•        *Declawing or onchyectomy may be performed through a partial amputation  of  the  distal phalanx using a nail clipper, removing as much of the distal phalanx as possible. The deep digital flexor process should be all that remains in the joint. Another method involves disarticulation of the distal interphalangeal joint using a scalpel blade to dissect out the distal phalanx.

•        Notice that the cat has an additional area of vibrissae (whiskers) in the caudal carpal area.

•        The origin of the descending portion of the superficial pectoral m. is located more caudally than in the dog, and it extends to the medial fascia of the radius and ulna. A small tendinous portion attaches to the brachiocephalicus tendon. The transverse pectoral is relatively large and may appear fused to the deep pectoral  m.  A small fascicle from the deep pectoral m. also inserts on the medial fascia of the radius and ulna and may be difficult to separate from the superficial pectorals (Figure 5). 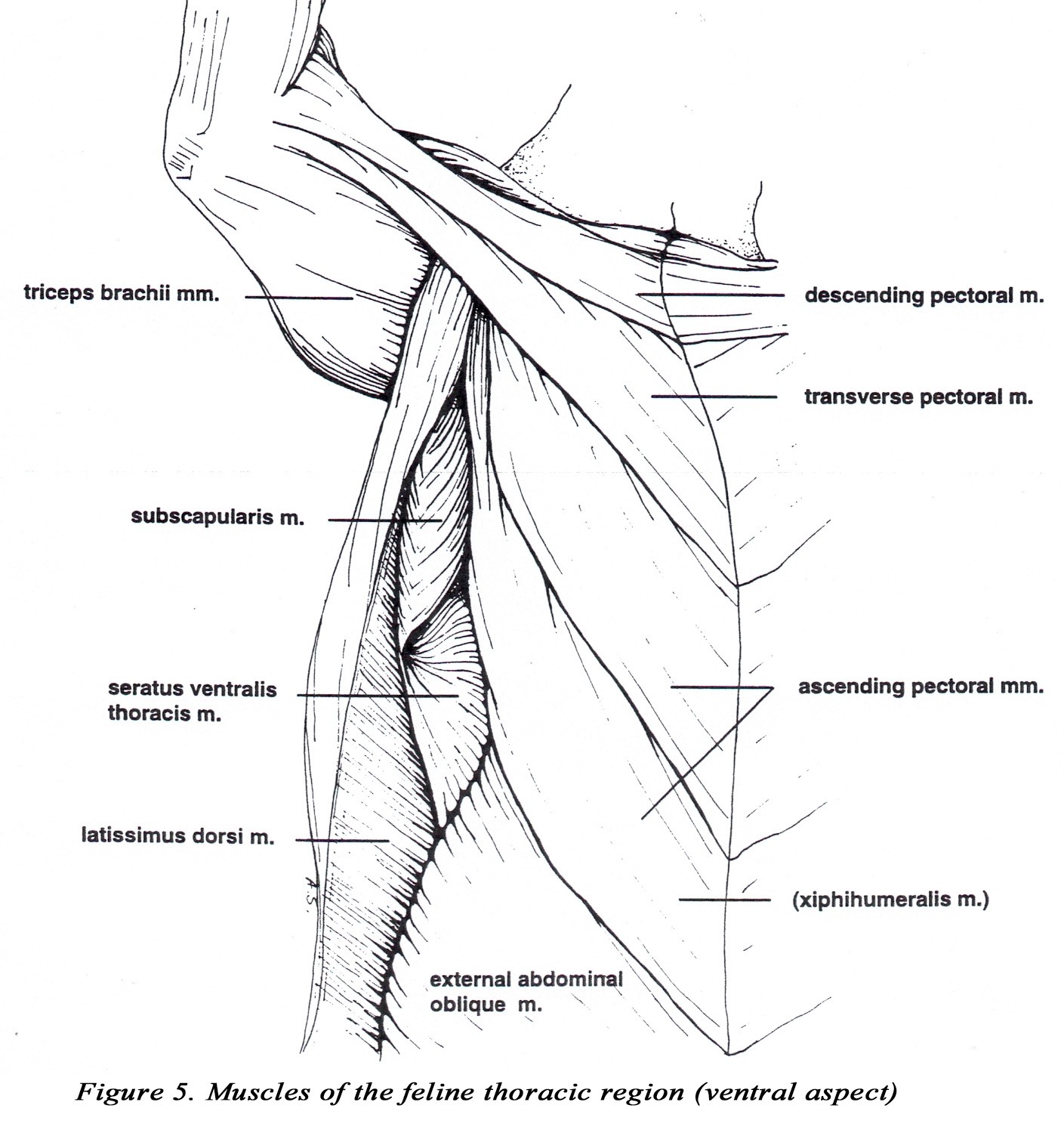 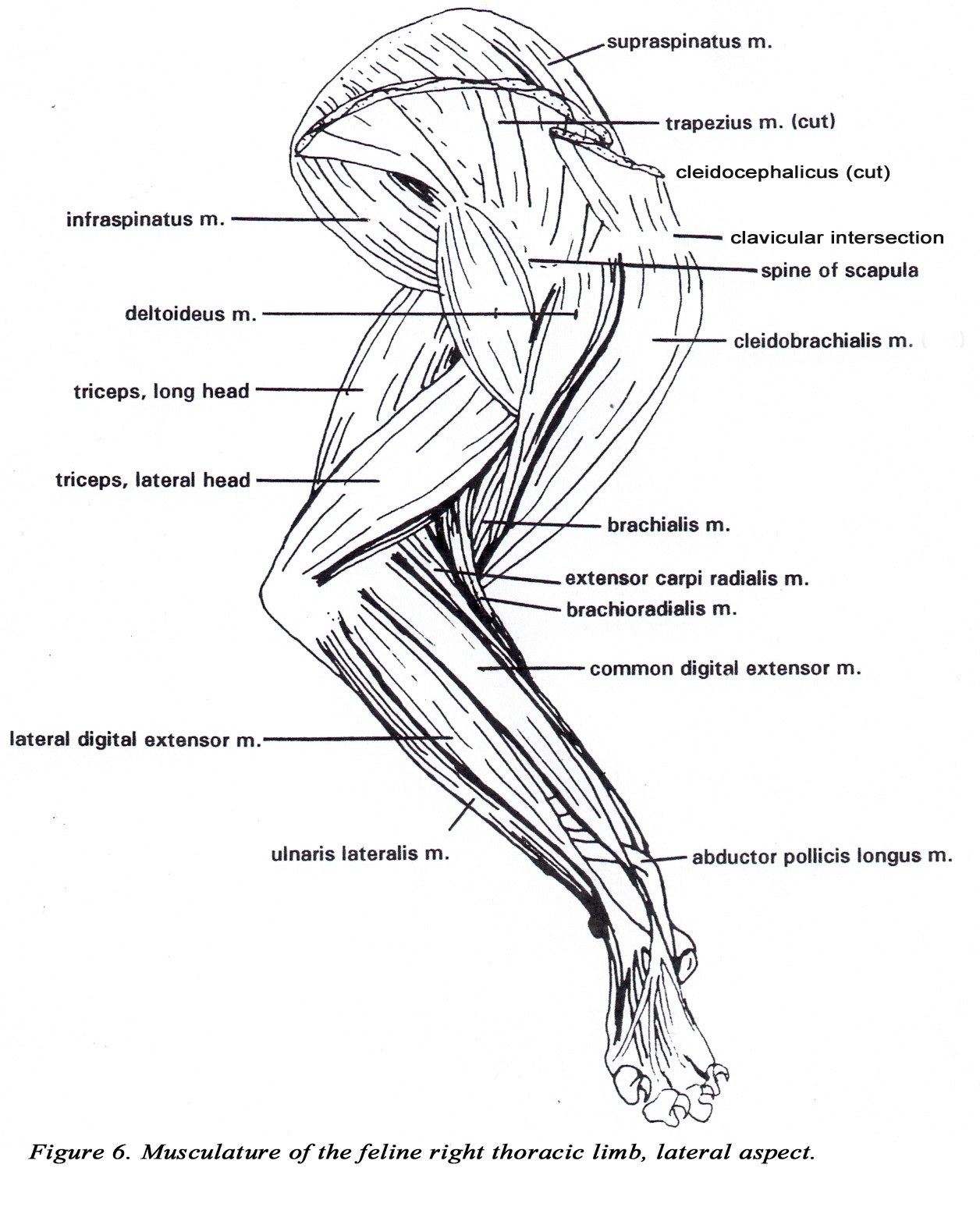 •        The two parts of the deltoideous m. (acromiodeltoideous and  spinodeltoideous)  are  more separate and prominent in the cat.

•        The triceps brachii m. usually has four heads (long, lateral, medial, and accessory).  The long head is usually not divided. The medial and accessory heads may appear fused, but the radial nerve can be observed passing between them. The medial head has an additional short part which arises from the distal medial side of the humerus, and inserts on the olecranon of the ulna. The median nerve and brachial artery pass through the supracondylar foramen which is covered by the short part of the medial head of the triceps brachii m. (Figures 2A & 7). 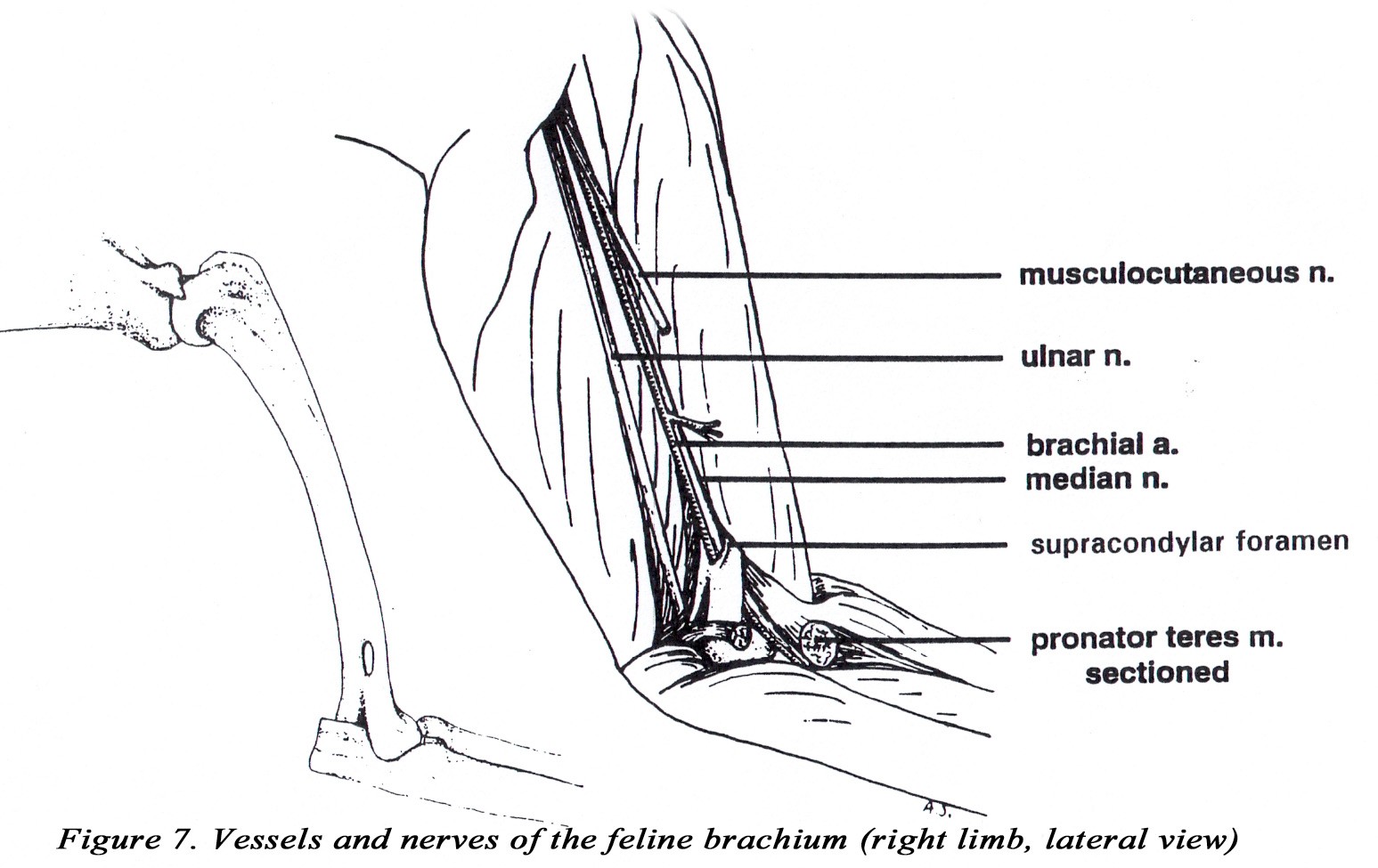 •        The coracobrachialis  tendon may be medial to the teres major m. and insert distal to it.

•        The biceps brachii m. (as in the dog) has only one head which inserts by a single tendon on the radial tuberosity (Figures 2B & 8). The origin attaches to the supraglenoid tubercle of the scapula (Figure 9). 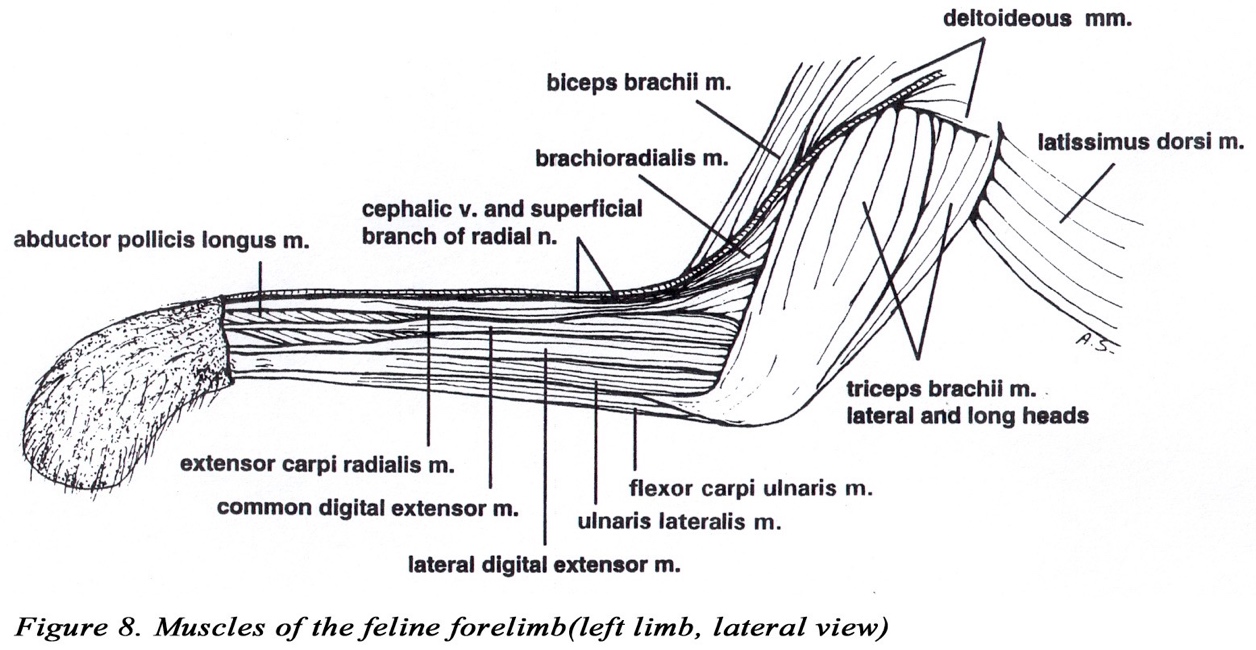 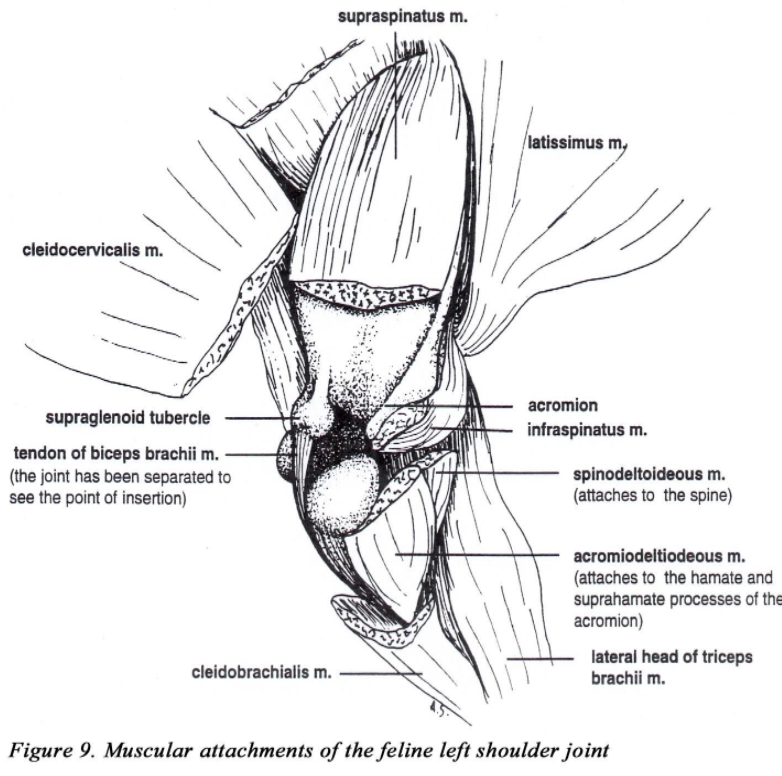 •        The tendon of the brachialis m. along with the brachiocephalicus ( cleidobrachialis) tendon inserts by means of a common tendon on the proximal medial ulna.

•        The brachioradialis m. is well developed in the cat. It originates from the proximal lateral humerus with the brachialis coursing distally with the superficial radial nerve and the cephalic vein to insert on the styloid process of the distal medial radius (Figures 6, 8,10). 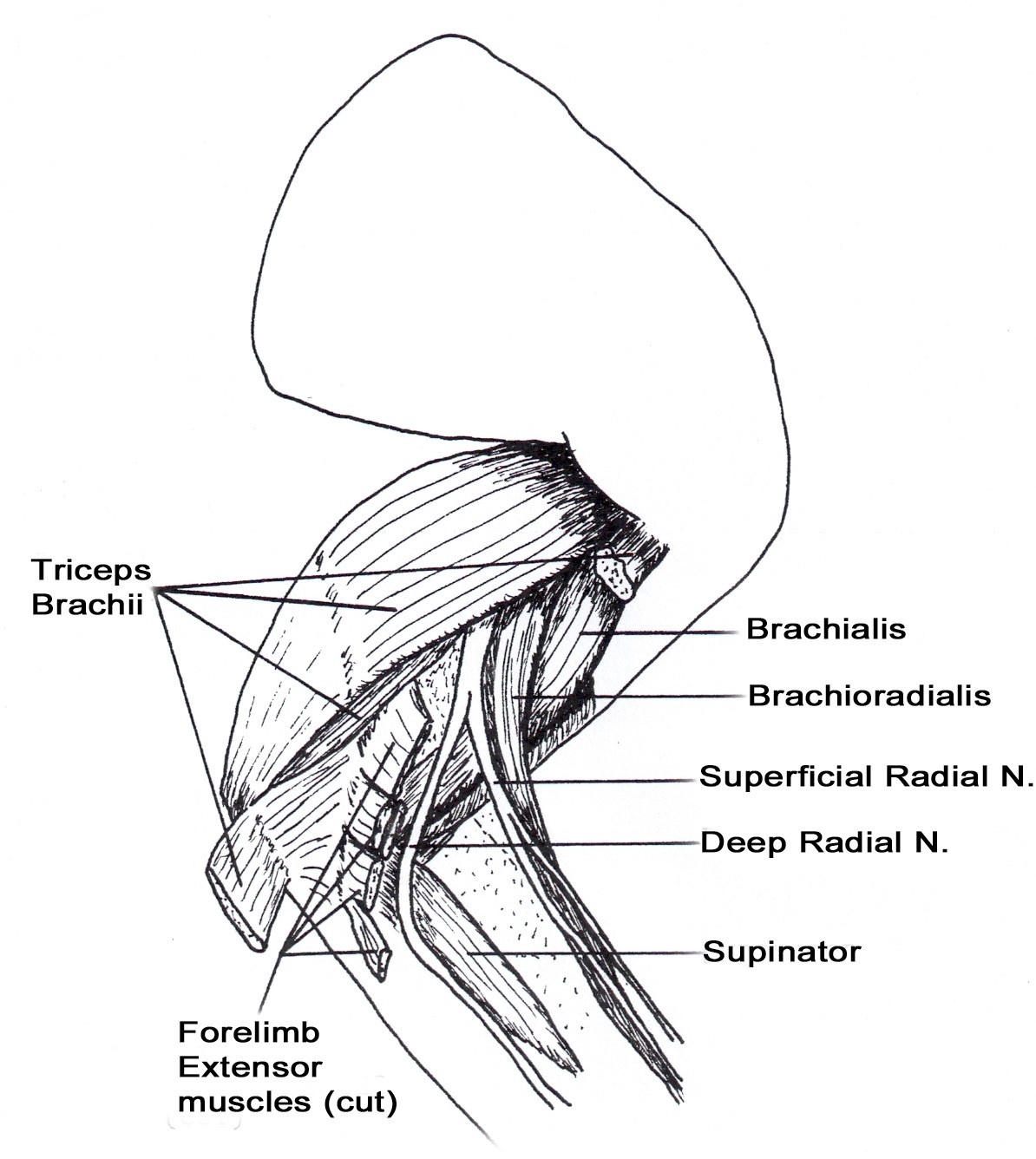 •        The extensor  carpi  radialis  m. has a long and a short head.  Both arise from the distal lateral humerus.

parts.  The ulnar and radial heads are much larger than in the dog.

•        The pronator  teres  m. may appear fused to the radial head of the deep digital flexor.

•        The ulnar  nerve lies deep to the short part of the medial head of the triceps m. at the level of the olecranon (Figure 7).

•        In the ventral-dorsal view, the pelvis is nearly rectangular in shape (Figure 11A).   The wing of the ilium and ischiatic tuberosity project laterally only slightly giving the pelvis a box-like appearance.

•        The patella is pear-shaped in cats (Figure 11C).  This is readily appreciated on radiographs.

•        The interosseous space between the tibia  and fibula  is nearly the same width from the proximal to the distal articulation (Figure 11B). 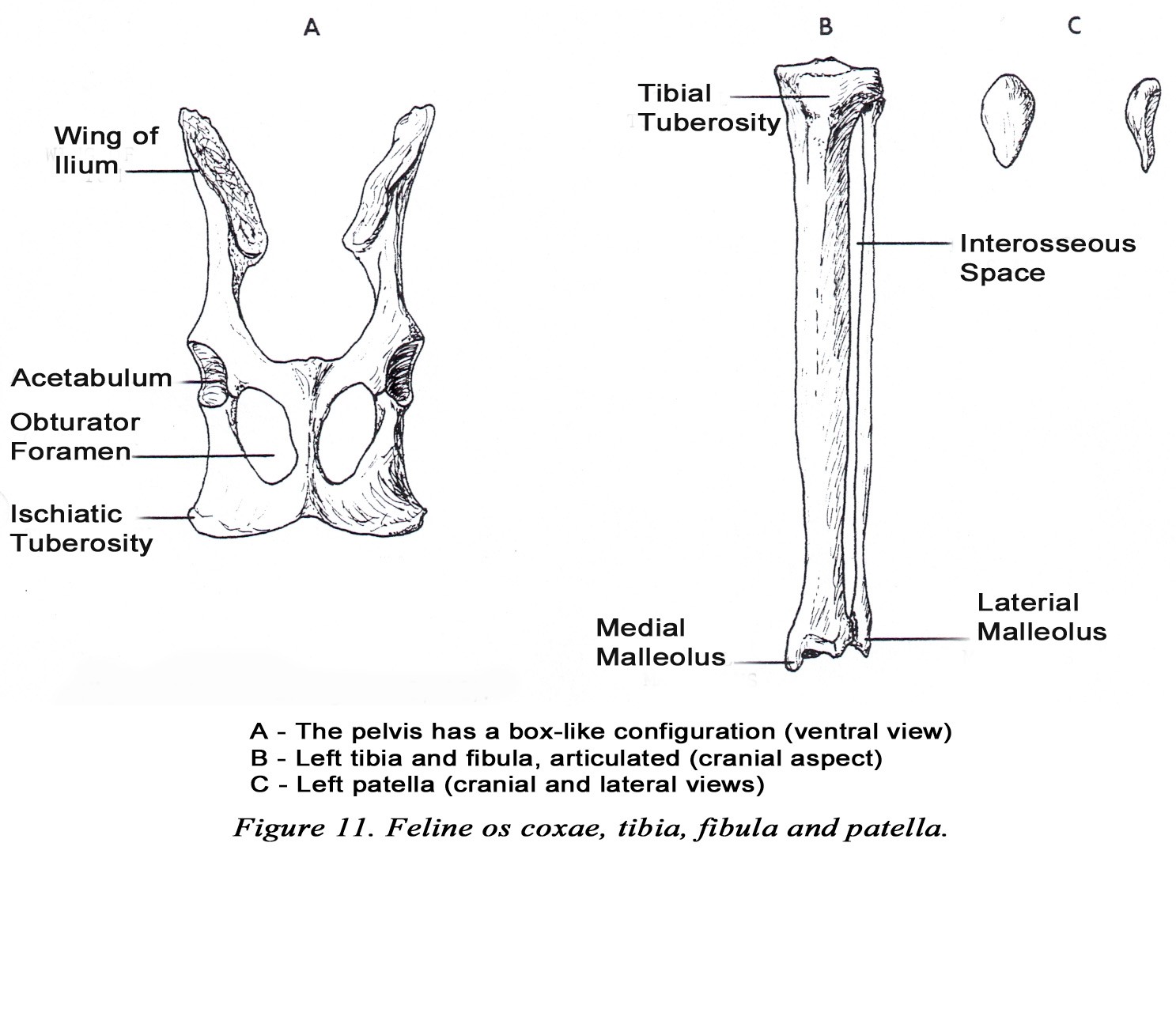 •        The sacrotuberous  ligament is absent in cats.  Thus, the biceps  femoris  m. originates only from the ischiatic tuberosity (Figure 12).

•        The gluteofemoralis (caudofemoralis m.) is found in cats adjacent to the biceps femoris m. (Figure 12).  Its origin is on the transverse processes of the second and third caudal vertebrae.  The muscle belly lies cranial to the biceps femoris m. and both muscles insert by means of the fascia lata on the patella, tibial tuberosity and cranial margin of the tibia.

•        The sartorius  m. usually appears to have only one belly which has the same insertion as the two bellies of the canine muscle. (Figures 12 & 13). 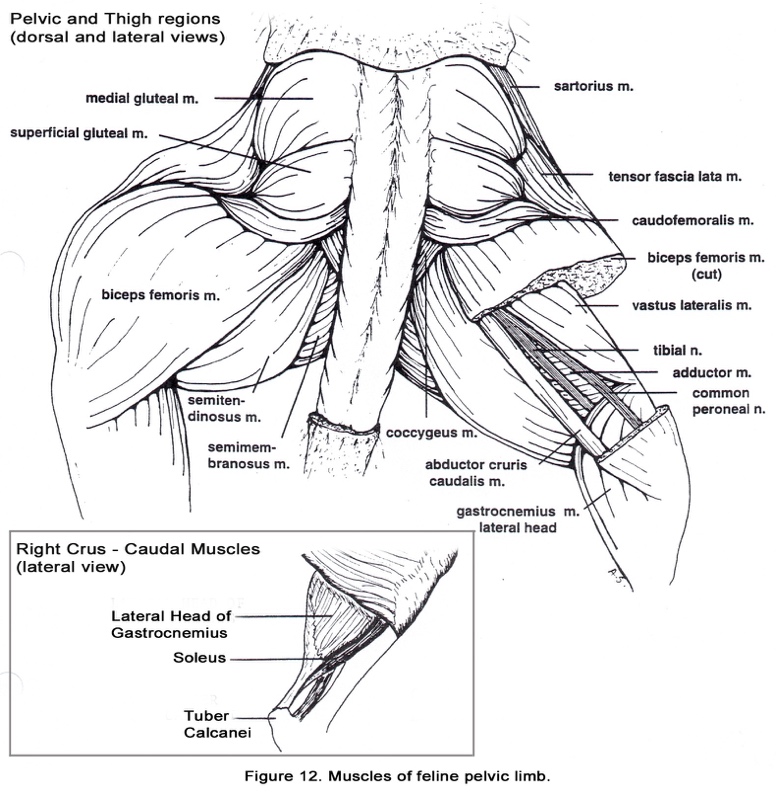 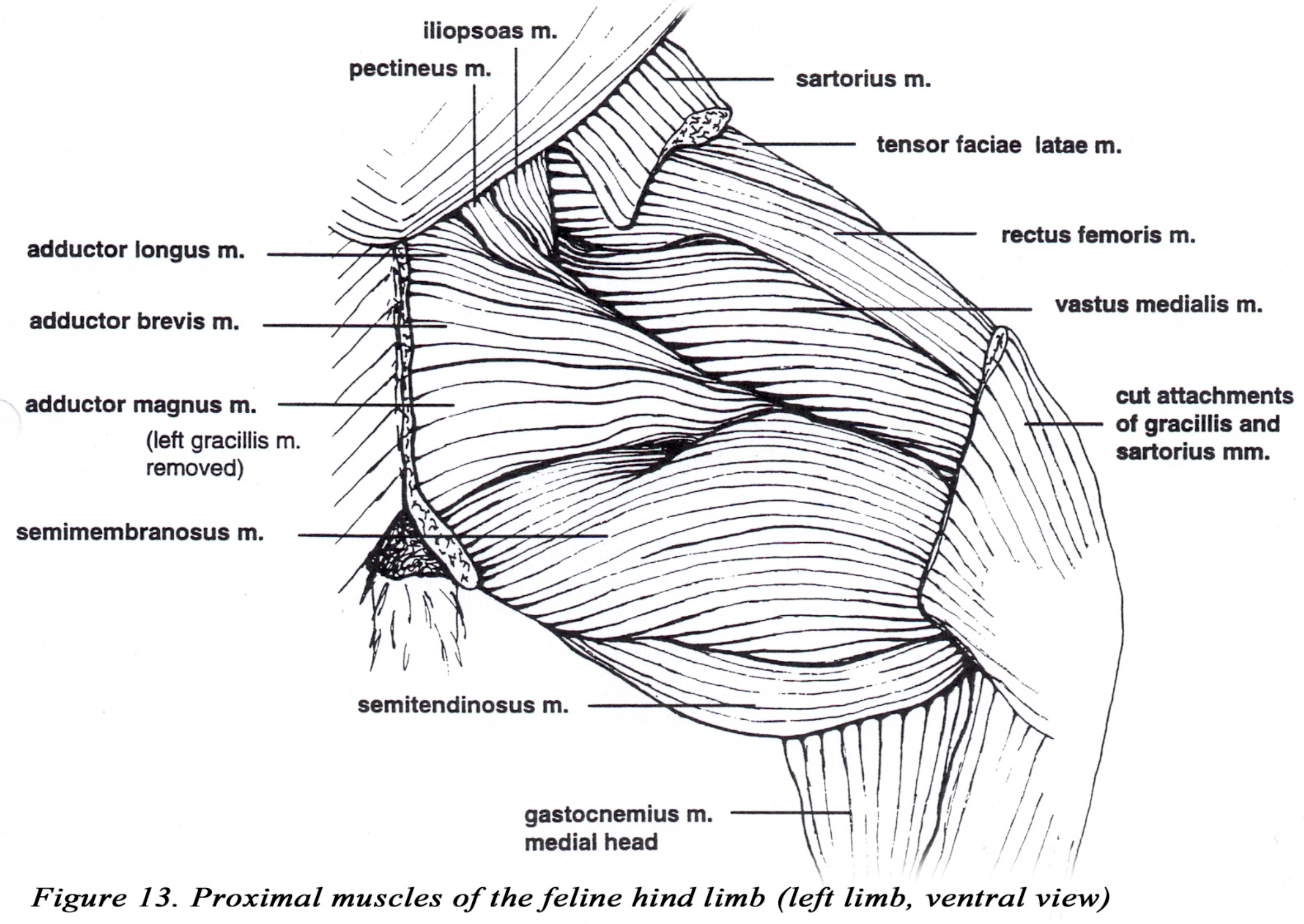 •        The adductor longus m. is thin and adjacent to the pectineus m. which is also flattened in comparison to the canine muscle. (Figure 13).

•        The vastus medialis and intermedius mm. are extensively fused and may also be partially fused to the vastus  lateralis (Figures 12 & 13).

•        The soleus  m. is found in cats and many other mammals (Figure 12).  It is deep to the lateral head of the gastrocnemius m..  The origin of the soleus is on the head of the fibula.  The slender tendon of the soleus unites with the gastrocnemius tendon to form a major part of the common calcanean tendon. Notice the color of this muscle.  An increase in mitochondria and myoglobin is responsible for the darker color of this fatigue-resistant muscle.

•        The nuchal ligament and supraspinous ligament are absent in the cat (DG p. 88). This allows greater flexibility of the vertebral column.

•        The mandibular salivary gland is caudal to the  maxillary  vein  and  the  mandibular lymph  nodes are on either side of the linguofacial vein (DG p. 95).

The thoracic  duct enters the thorax caudally on the left lateral side of the aorta and continues cranially in this location. (DG pp. 105-106).  The duct may be double for all or part of its length.

•        The quadrate and right medial lobes of the l iver are fused. On the visceral surface, the fossa for the gall bladder marks the boundary between the quadrate lobe medially, and  the  right  medial  lobe laterally. (DG p. 149).

The feline kidney is true unipyramidal.  Subcapsular stellate and interlobar veins are prominent on the surface of the kidney.  The capsule may be quite tough.

The arterial supply to the abdomen is similar to the dog, with numerous variations.   The arteries should be identified according to the region the vessel supplies and not by the branching pattern you observe.

•        The scrotum is immediately ventral to the anus and covered by hair.

•        A pair of bulbourethral glands are located caudal to the  prostate.  They  are  immediately proximal to the root of the penis and adjacent to the ischiocavernosus m. at the level of the ischial arch (Figure 14). 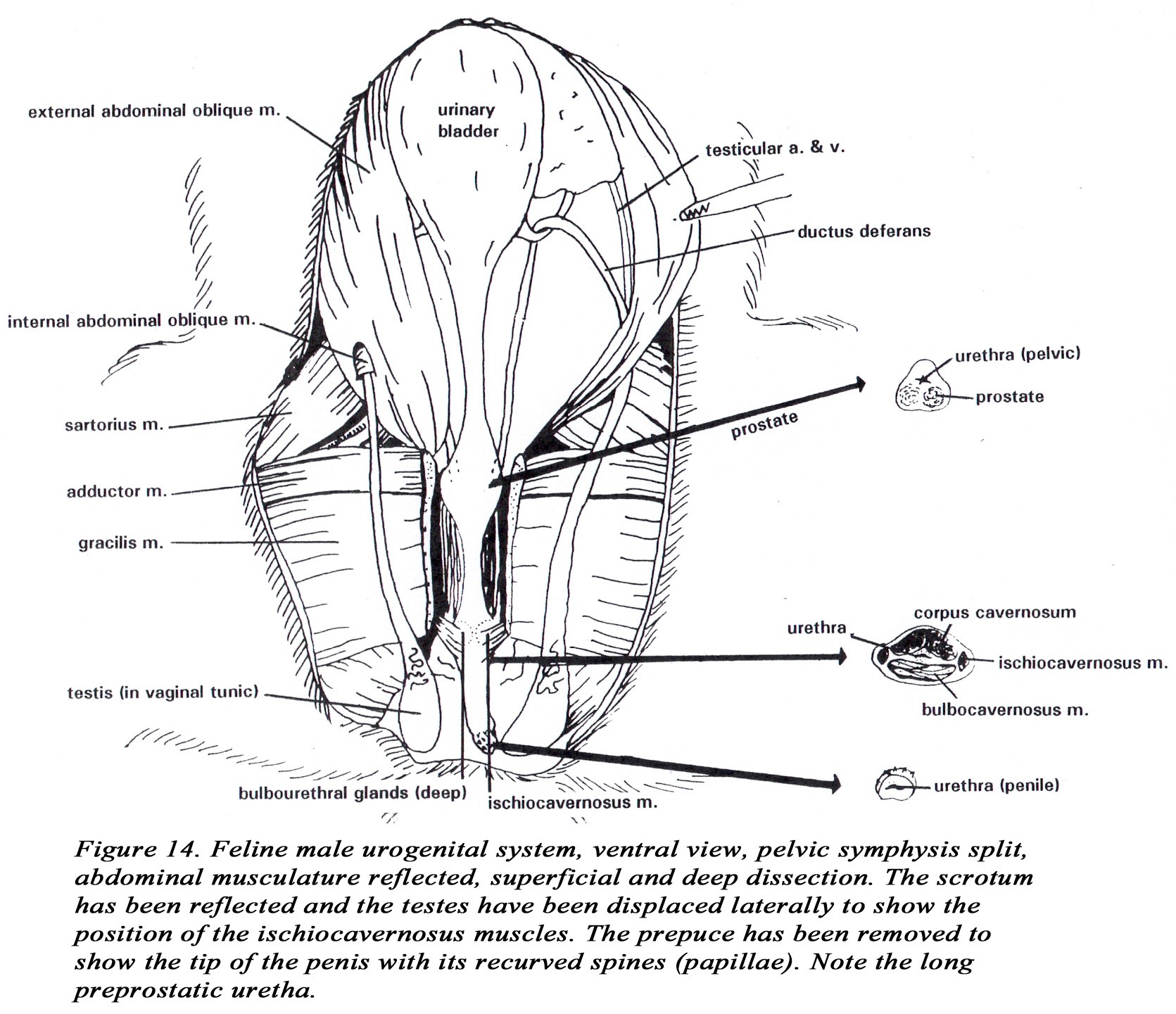 •        The penis is short, directed caudally, and the glans is covered with curved papillae (spines). The glans penis is short and not differentiated into a pars bulbus and a pars longus. Otherwise, the structure of the penis is similar to the dog. Because of the caudal direction of the penis the dorsal artery and nerve are located ventrally.

The branching of the internal  i l iac  artery varies considerably in the cat.  As usual, identify the arteries by the area they supply. The first branch of the internal iliac is the umbilical a. The internal pudendal, caudal gluteal and iliolumbar aa. often arise at the same point, or the iliolumbar may arise near the umbilical a. The iliolumbar passes directly cranial to the shaft of the ilium. The caudal gluteal a. (after giving off the cranial gluteal a.) is small and may not extend to the caudal thigh musculature.

The pudendoepigastric trunk gives off an additional branch within the abdominal cavity, the middle vesical artery to the bladder. The internal pudendal artery in the cat remains within the pelvic canal throughout its course (in the dog the internal pudendal artery gives off visceral branches then passes obliquely across the greater ischiatic notch to become lateral to the coccygeus m. – DG p. 175). 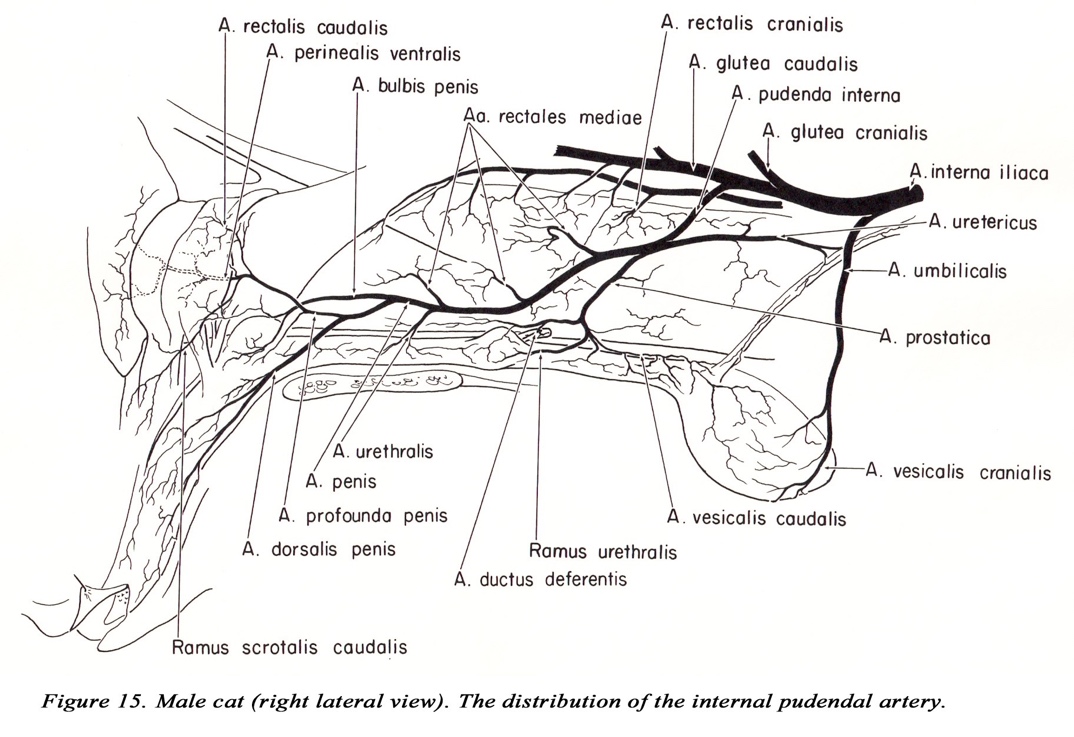 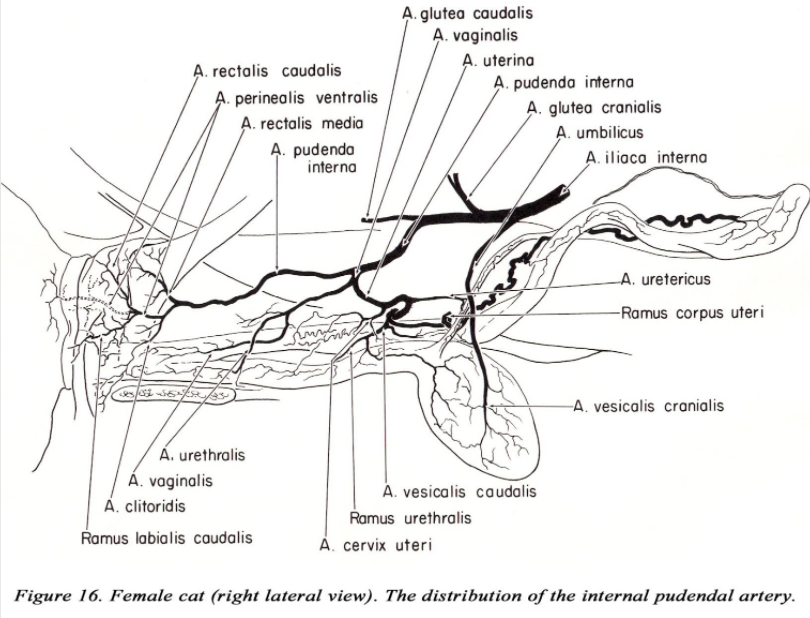 •        The buccal  ( molar)  gland is an additional salivary gland in cats located in the ventral buccal wall medial to the lower molar.  Magnification is necessary to observe the orifice of the duct near the lower molar.  The parotid  duct enters near the upper molar (DG p. 233). The zygomatic salivary gland is located further ventral to the zygomatic arch than in the dog (DG p. 233)

•        The laryngeal  ventricles are absent from the larynx of the cat resulting in vocal  ridges instead of vocal folds.  The arytenoid  cartilage lacks both corniculate and cuneiform processes and the vestibular fold is absent (DG pp. 235-236).

*Purring is under voluntary control by a rhythmic contraction of laryngeal muscles. The recurrent laryngeal nerve innervates these muscles. Inspiration  and  expiration  phases  are  nearly  equal  while  purring.  The laryngeal muscles (cricoarytenoideus lateralis and thyroarytenoideus) contract producing stenosis at the glottis and causing a change in trans-glottal pressure. When the glottis begins to open (cricoarytenoides dorsalis) the purring sound occurs.  This cycle repeats about 25 times/minute resulting in the palpable and audible sound of purring.  To auscultate (hear) the heart and lungs, briefly occlude the external nares.

•        The free margins of the feline tracheal  cartilages overlap dorsally.   The trachealis m. is dorsal to these rings.

•        When the feline iris contracts (miosis) the pupil appears as a line.  This is due to the direction of orientation of the muscle.

•        The esophagus in the cat has striated (voluntary) muscle along only 2/3 of its length.  Vomition in the cat is more difficult than in the dog.

•        The internal carotid artery is atrophied in the adult cat (DG p.  249).  Instead,  the ascending pharyngeal artery (DG Figure 5-43 & 5-45) supplies the arterial circle of the brain via the distal remnant of the internal carotid artery.  The carotid  sinus is located at the base of the occipital and ascending pharyngeal arteries (DG p. 249).