1 A Short History of Hedges

Enclosures made from plants were critical for safety and fortification for early civilizations while keeping some things in (animals) and others out (enemies and thieves). Property delineation was first defined by hedgerows that incorporated trees and evolved into the art and science of hedgelaying, still practiced in England and Europe.

As people became more civilized, the need for walls and thorny hedges diminished. Romans used decorative landscape hedges as found in Fishbourne Palace, Sussex, England, above. Hedges moved beyond hedgerows for land management to an element of garden design that became a classic, essential feature of gardens throughout the world.

Great gardens, such as Versailles in France and Het Loo in the Netherlands, used low hedges for parterres and high hedges for garden rooms to show how man had conquered nature and to impress everyone who saw these gardens. Formal gardens with high and low hedges became the norm for European rulers.

From a practical aspect, as common land ownership evolved, there remained a need for land boundaries. In America Samuel Deane noted in 1790, “live hedges were preferable to fences and ‘dead hedges’ (wattle fences using woven plant material) because the living plants created a ‘perpetual fence’ whose posts never decayed and stakes never failed” (History of American Landscape Architecture Contributors, 2021). A.J. Downing (1838) reflected on living hedges: “The advantages of live fences are, great durability, imperviousness to man and beast, a trifling expense in keeping in order, and the great beauty and elegance of their appearance. Harmonizing in color with the pleasant green of the lawn and fields, they may, without (like board fences) being offensive to the eye, be brought, in many places, quite near to the dwelling-house.”

John Evelyn (1620-1706) in his classic Sylva, one of the first books on forestry and the value of trees, commented on his holly hedge after a visit by Peter the Great: “Is there under heaven a more glorious and refreshing object of the kind, than an impregnable hedge of about four hundred foot in length, nine foot high, and five in diameter; which I can shew in my now ruin’d gardens at Say’s-Court, (thanks to the Czar of Moscovy) at any time of the year, glitt’ring with its arm’d and varnish’d leaves? The taller standards at orderly distances, blushing with their natural coral: It mocks at the rudest assaults of the weather, beasts, or hedge-breakers.”

Hedges were an integral feature of the Arts and Crafts gardens in the 20th century. It is difficult to imagine Gertrude Jekyll or Thomas Mawson’s designs without the long dark green evergreen hedges to back the flower borders or define the garden rooms that were so much a part of garden designs of this era. The dark hedges that define Sissinghurst’s garden rooms are often not one, but two, thus creating a double hedge to further strengthen the design. Mawson lamented the antipathy of hedges and felt opportunities should be sought for planting them; hedges furnish “an extended base to the architectural scheme and give one a feeling of shelter and protection for winds and harsh weather” (Mawson, 1900). 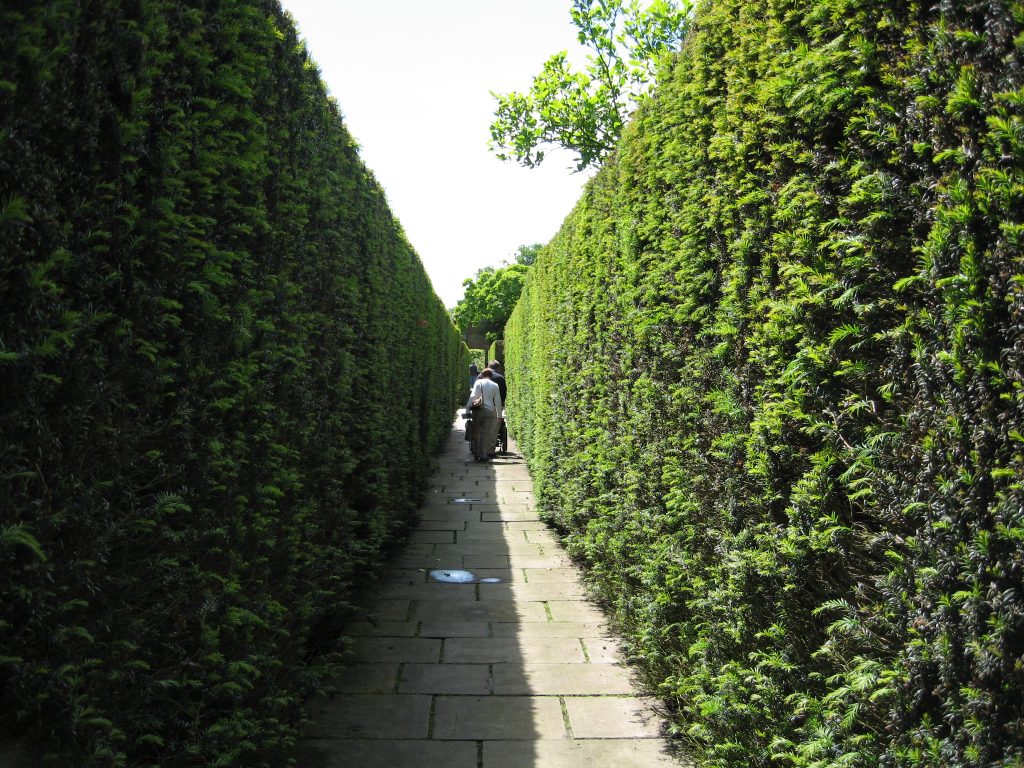 As plant breeding advanced in the mid-20th century, new colorful and shorter plant selections became available for hedges. To showcase new plants, botanical gardens and arboreta increased their collections with hedge displays such as those planted at the Central Experimental Farm, Ottawa, Ontario, in 1889; the Morton Arboretum in Lisle, IL, in 1934; and Arnold Arboretum in Boston, MA, in 1937.

A Short History of Hedges Copyright © 2021 by Mary Hockenberry Meyer. All Rights Reserved.