On the southern edge of the Minnesota Landscape Arboretum (MLA), just before the new Eastern Drive, sits a 1½ acre more than 50-year-old living display showing how hedges grow in Minnesota. The sign reads simply “Hedges.” 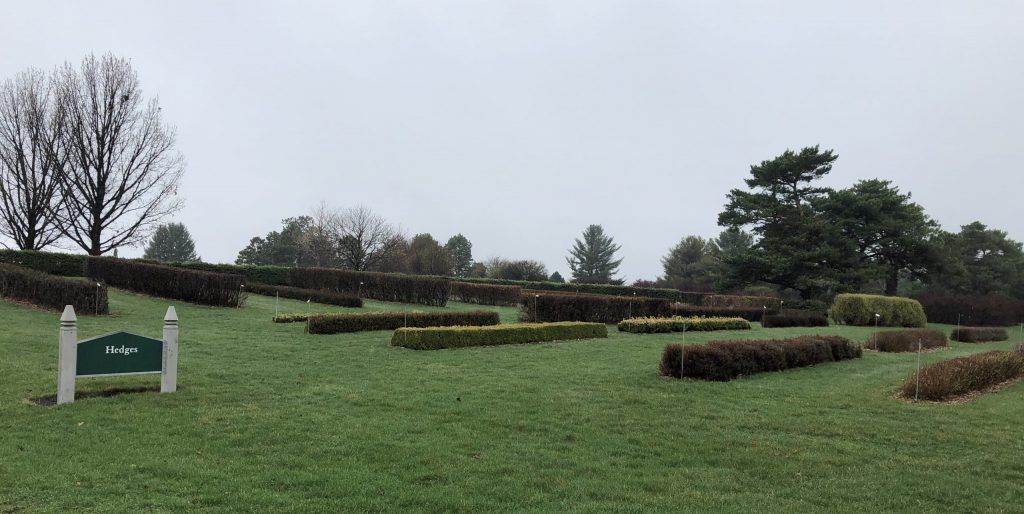 In 1958, the founding year of Minnesota Landscape Arboretum, when formal trialing of plants in cold climates began, a hedge collection or display was one of the first things Dr. Leon Snyder, founding director, mentioned as being planted (Anonymous, 1960). No doubt Snyder knew the work of Donald Wyman at the Arnold Arboretum and had likely visited and seen the hedge display there or at the Morton Arboretum in Chicago.

There is no formal statement of purpose for the Hedge Display, however, it seems implied that the purpose aligns very well with the overall mission of the Arboretum: to determine which plants could grow and evaluate their performance in USDA Hardiness Zone 4. In consultation with curators David Stevenson and Nick Kreevich, and Andersen Horticultural Librarian Kathy Allen, it was determined that 1967 is most likely the year the Hedge Display was planted. Peter Moe, current MLA Director noted, “formal hedges were more prevalent in home, commercial, and public landscapes in the mid-1960s and the collection was planted to show which plants were the best for formal hedges when properly pruned. There were fewer compact forms of many species at that time and many people tended to try to keep large plants such as Amur Maple as medium-sized hedges.”

The first annual MLA report published in April 1961, mentions a list of Special Gardens and Collections, “projects which require a relatively small initial investment but which require annual financial assistance in their maintenance.” A “hedge garden” was the second of 14 projects listed for the future of the fledgling Arboretum.

The 1966 annual report includes this paragraph: “Hedge Area–A hedge area, which will cover about 1½ acres, was started on the land purchased by the St. Paul Garden Club. The new road will cut through the center of this section. For a suitable enclosure for wind protection, a border of Black Hills spruce was planted around the area. When the planting is complete, about 90 different hedge materials will be included.” The back cover of this publication showed the “Hedge Garden” on the map of the Arboretum.

The 1968 Annual Report noted: “The hedge area is beginning to take shape. About 20 hedge materials were planted, and the entire area was seeded down to bluegrass in August. About 90 different materials will be planted.” The 1969 Annual Report back cover included a map showing the land acquisitions enabled the expansion and planting of the Hedge Display.

Leon Snyder authored the two-page publication entitled Formal Hedge Plants in 1971, stating, “We have started a collection of formal hedges in the Arboretum. When completed, this hedge area will contain 90 specimens and cultivars. 66 are planted now. The following show the greatest promise.” He then listed 33 plants with a brief description of each, including some of the first information on broad-leaved evergreen hardiness, such as boxwood.

In 1980, Mervin Eisel made minor revisions to Snyder’s publication with updated information on the Korean boxwood stating, “We have been quite successful with this variety in sheltered locations. Individual plants 20 or more years old on favorable sites are still attractive.” The same 33 plants are listed with comments as in the 1971 publication.

Snyder (1985) included a section entitled Pruning Hedges (p. 57-58) in Gardening in the Upper Midwest, where he defines informal hedges as unpruned while formal hedges are “sheared using the tip pruning method.” He states how to prune: at planting cut back to six inches of the base and always trim wider at base. Formal hedges, he advises, require much work, but “similar results can be achieved by selecting the right plants to grow as an informal hedge.” He lists 20 plants for informal hedges and 15 for formal, pruned hedges (p. 172). In another book on native plants, Snyder listed 19 ornamental trees and shrubs as useful for hedges and screens (Snyder, 1991). No doubt much of his knowledge was formed from the Arboretum hedge display.

As of 2021, the MLA Hedge Display contains 73 taxa, or different plants in 36 genera, with 53 cultivars or named selections. Ten hedges in the display are evergreen with boxwood being the only broad-leaved evergreen, but there are three kinds of boxwood! Several of the plants date back to the 1967 planting, making them over 50 years old.

Darwin Pellett is the Landscape Gardener at the MLA who has managed the Hedge Display for more than 20 years. Currently, he formally shears all but three of the hedges. See details on maintenance and care of the Arboretum’s Hedge Display in the chapter entitled MLA Hedge Care and Maintenance.

Hedges: A Brief History and the Minnesota Landscape Arboretum Hedge Collection by Mary Hockenberry Meyer is licensed under a Creative Commons Attribution-NonCommercial 4.0 International License, except where otherwise noted.