Know what Strokes and Alzheimer’s Disease are and how the affect a person’s brain and behavior.

is a which causes brain cells, also known as neurons, to slowly degenerate. The disease is marked by a buildup of plaque in the brain due to changes in brain chemistry. Typically, degeneration begins in brain regions responsible for memory, like the . It then slowly begins to spread across the brain. This occurs through a series of stages. I outline three here, but I have seen as many as seven indicated. The resulting symptoms are memory loss and general confusion. Personality changes and a decreased ability to concentrate have also occurred. These symptoms often lead people to confuse Alzheimer’s disease with dementia, which is actually an for diseases involving . Therefore, Alzheimer’s disease is actually a type of dementia. Many research labs are making progress on treatments and prospective cures. So far, earlier detection and medication to improve have been the largest accomplishments for these labs. In addition to these findings, exercising the mind and body also appear to slow symptoms.

A results from an impairment in blood circulation in the brain. The onset is sudden and can be described as a brain attack. A stroke can either be which involves a blood clot or which involves a burst blood vessel. There is about a 70% and 30% split between ischemic and hemorrhagic strokes. Additionally, , described as ministrokes, are temporary blockages in blood flow which resolve themselves. These attacks are considered warnings because they often precede larger strokes. Note: the likelihood of a second stroke greatly increases after having one stroke. The good news is there are many things to do to prevent and treat strokes. If you are experiencing an ischemic attack, clot busting medications like tPA can effectively treat a stroke if administered within three hours. In addition, making healthy lifestyle changes in diet and activity can also lower the risk of having a stroke in the first place. Other medications like blood thinners can also prevent an ischemic stroke. In the rare case of a hemorrhagic stroke, patients may need surgery. After suffering from a stroke, many patients receive occupational and physical therapy to strengthen the area of the brain where the stroke occurred. 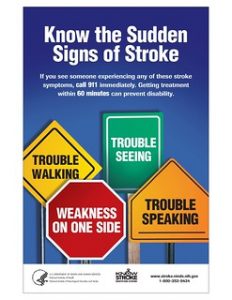 Strokes can occur in any region of the brain which means the symptoms can widely vary. Small areas of the brain or entire hemispheres of the brain can be affected. Strokes often have clear physical symptoms such as weakness, numbness, facial drooping, decreased vision, impaired speech, dizziness, mental confusion, the inability to understand and more. These symptoms vary based on the location of the stroke as each area of the brain has specific functions. In some cases the location of the stroke results in no noticeable symptoms; these are called silent strokes. A good way to remember the major symptoms is to be fast.

Face – facial drooping
Arms – numbness or weakness in the arms or legs
Speech – sudden difficulty speaking
Time – If you notice these symptoms, it is TIME to call 911.

Authored by: Kori Skrypek Provided by: University of Minnesota License: CC BY 4.0

A disease which causes brain cells to stop functioning properly, which impairs memory and other brain functions.

A disease or condition in which the symptoms worsen overtime

The area of the brain largely responsible for learning and memory.

A collective term for a category of specific things.

The worsening of brain function. It is often seen in loss of coordination, forgetting memories, confusion, loss of memories, and impaired judgement.

Your brain's ability to think and carry out tasks.

sudden impairment in the blood supply reaching the brain, which causes brain cells to starve.

The term used by doctors to indicate the blood flow is being blocked (often by a blood clot).

The term doctors use to indicate that blood is escaping from a vein (often because a vessel burst or ruptured).

A ministroke where a stroke occurs for a temporary amount of time. This is because the blood clot cutting off circulation goes away on its own.