Giardia is a protozoan parasite that causes small intestinal disease and diarrhea in a wide variety of animals, including people. In 2018, the state of Minnesota, 6.47% of dogs and 4.13% of cats tested were positive for this disease. Because of Giardia’s worldwide distribution and potential zoonotic potential, many diagnostic tests including point of care testing are available for the detection of Giardia. These tests are summarized in the following table.

The Giardia SNAP® Test we will be using in the laboratory is similar to the Canine parvovirus test in that it is also used to detect the free-floating antigen dispersed in the feces. This refers to an antigen that is not associated with a Giardia cyst wall or trophozoite.

The role of Giardia in the development of intestinal disease is still largely unknown in dogs as we can detect Giardia cysts and antigens in dogs and cats that are asymptomatic and having diarrhea. (See AOD1 notes for more specifics on the life cycle and pathogenesis)

A few hypotheses for asymptomatic animals and detection of the protozoan include:

Since we can detect Giardia in both asymptomatic and symptomatic dogs, CAPC recommends that only symptomatic dogs be tested for Giardiasis using point of care testing including the Giardia SNAP Test. Additionally, for those dogs that are symptomatic and have completed the appropriate therapy, CAPC recommends the following, “Follow-up testing may be done 24-48 hours after the completion of therapy if clinical signs have not resolved. It is recommended to perform a fecal flotation with centrifugation primarily for the detection of cysts in solid or semisolid stools. ‘ELISA tests may remain positive even after treatment for variable periods of time and should not be used as a guide to determine reinfection or failure of treatment.” Thus a positive SNAP test should always be followed up with a fecal flotation to identify active disease in cases that may be refractive to treatment.

While we will not be discussing treatment specifically in this course, the following is a decision tree that may aid in answering the conundrum of “to treat or not to treat” in asymptomatic animals that Giardia is detected on fecal flotation.

Fun fact: The word FECES has 5 letters in it and the Parvo test required 5 drops of the brown reagent/fecal solution 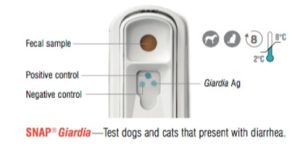 The following information below was taken directly from the Cornell University Animal Health Diagnostic Center Website.

The animal is infected with Giardia.

The animal may be infected with Giardia but is shedding cysts below the limits of detection by flotation. Alternatively, the ELISA is a false positive that may be seen most frequently when the results are in the low positive range. To resolve the issue, collect a second sample for analysis.

The animal may be infected with Giardia but is producing antigen below the limits of detection by ELISA. Alternatively, the ELISA is a false negative. To resolve the issue, collect a second sample for analysis.

To answer the questions in your laboratory activity. Please refer to the IDEXX website.

Clinical Veterinary Diagnostic Laboratory by Erin Burton is licensed under a Creative Commons Attribution-NonCommercial 4.0 International License, except where otherwise noted.